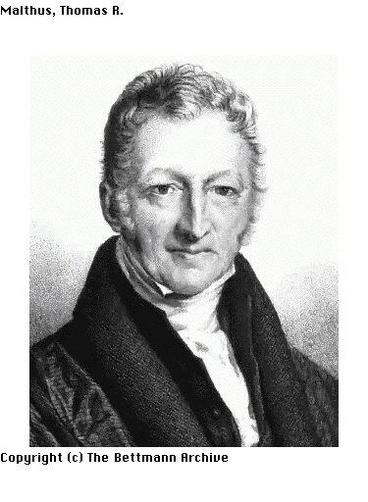 The first significant contribution to the theory of population ecology was that of Thomas Malthus, an English clergyman, who in 1798 published his Essay on the Principle of Population. Malthus introduced the concept that at some point in time an expanding population must exceed supply of prerequisite natural resources, i.e., population increases exponentially resulting in increasing competition for means of subsistence, food, shelter, etc. This concept has been termed the "Struggle for Existence".

Malthus's theories profoundly influenced Charles Darwin 1859, On the Origin of Species, e.g., the concept of "Survival of the Fittest". Mortality of this type can be termed "facultative mortality" (as opposed to catastrophic mortality, e.g., weather, insecticides).

A density-dependent mortality factor is one that causes a varying degree of mortality in subject population, and that the degree of mortality caused in a function (i.e., related) to the density of the subject (affected) population (density-geared, feedback regulation, self-regulating or self-limiting) may and typically involves a lag effect., e.g., most biological control agents.

Human populations represent another example of exponential growth. Magnitude of the problems posed by human population growth can be seen from the fact that it took more than 1 million years for the human population to first reach 200,000 (the current daily rate of increase (See: US Census, Historical Estimates of World Population). The human population is estimated to have first reached 1 billion persons in 1830, and 2 billion in 1930, a doubling time of 100 years. In 1960, thirty years later, the population edged past 3 billion, and a mere 15 years later, 4 billion. In 1986, we exceeded 5 billion for the first time. Despite a slowing of the growth rate, it is expected that the human population will exceed 6 billion in early 1999. To feed this population, only as well as we presently do, it will be necessary to increase food production 20% over the next 10-15 years.

Equation for population growth model is X=X0ert where the original population is X0 mathematical constant: natural log (e = 2.718), represents Malthusian parameter. Population will increase in size to X, over time (t), if rate of increase (r) is positive. If population not growing, i.e., r = 0.0, then rt = 0.0, and e0.0= l.0, X = X0. When r has a value greater than 0 population will increase, e.g., rt = 0.693 (e0.693 = 2.0), population will double in time em>t (X = 2X0). The doubling time of this population will be t = 0.693/r. If the population is decreasing, r is a negative value. The function of X = X0ert can be made a straight line by the natural log transformation, i.e., lnX = lnX0 + rt (the equation for a straight line). Characteristics of this line are: an intercept at& lnX0 and a slope of r. Linear regression analysis can be applied (since this is a straight line), with the independent variable being time. The linear equation thus describes the rate of population growth (+) or decline (-). Algebraic rearrangement of this equation permits one to solve for the rate of population increase.

In the 1920s, A. J. Lotka (1925) and V. Volterra (1926) devised mathematical models representing host/prey interaction. This was the first attempt to mathematically represent a population model as achieving a cyclic balance in mean mean (characteristic) population density, i.e., to attain a dynamic equilibrium. The Lotka-Volterra curve assumes that prey destruction is a function not only of natural enemy numbers, but also of prey density, i.e., related to the chance of encounter. Populations of prey and predator were predicted to flucuate in a regular manner (Volterra termed this "the law of periodic cycle"). Lotka-Volterra model is an oversimplification of reality, as these curves are derived from infinitesimal calculus when in nature association is seldom continuous over time (life cycles being finite).

A. J. Nicholson (Australian entomologist) was a leading proponent of concept of density-dependent mortality factors. He maintained that density-dependent mortality played the key role in regulating prey populations. This is the essence of the so-called "Balance of Nature" theory. This theory implied a static balance about a mean (characteristic) equilibrium density with reciprocal (feedback) oscillations in density about these means.

Nicholson and V. A. Bailey (1935) proposed a population model that incorporated a "lag effect". This is particularly appropriate to parasitoids were population effects of attack (oviposition) may not be evident until the parasitoid has completed its immature development and emerges as a adult (killing the host).

However, a contrary view of the nature of population regulating mortality factors was argued by others, especially W. R. Thompson (Dominion Parasite Laboratory). The Canadian workers held that assumptions of Nicholson and like thinkers were unrealistic, and did not occur in nature, i.e., that the regulating role of a so- called density-dependent mortality factors was largely myth. These workers argued that it was unnecessary to postulate such a mechanism of population regulation. They observed that the environment never remains continually favorable or unfavorable for any species. If it did so that population would inevitably become either infinite or decline to extinction. They maintained it was more accurate to say that populations were (in reality) always in a state of "dynamic equilibrium" with their environment.

H. G. Andrewartha and L. C. Birch were leading proponents of the concept that populations could be, and often are, regulated by abiotic factors.

These arguments became heated in the mid-1950s and early 1960s. Much of the confusion and controversy regarding mechanisms of population regulation stemmed from an inadequate data base, but an even more confining limitation was the essential impracticality of making the extremely complex calculations required to manipulate such data. Accordingly rapid advances in theoretical ecology, especially in the area of population ecology, only occurred with the introduction of high speed computers and the refinement of statistical theory.

Much of early population theory was developed deductively from controlled laboratory experiments or fragmented field observations. This resulted in a tendency to oversimplification and the development of models often not reflecting biological reality.

One of the most useful starting points for a population ecologist is the development of a life table. A life table is a schedule of mortality for each cohort (age group) of individuals in the population. The methods were developed originally for actuarial or demographic studies. Multifactor studies which incorporated the life table technique were once largely the province of forest entomologists, but are now widely used in agriculture.

The final test of any population model is its usefulness to predict (generation to generation) changes in abundance or to explain why changes occur at particular population densities.

Consequences of recent advances in understanding of population dynamics has lead to almost universal (among ecologists) acceptance of the proposition that population growth is geared to population density.

Differences in the relative importance of density-dependent and density-independent mortality factors varies in different environments, e.g., the role of biotic components tends to be greater in more stable (benign) environments.

Competitive processes/cooperative processes: we often think of interactions between individuals even within species as only negative, but interactions can be positive (even between species), e.g., defense against predators, genetic diversity (concept of minimum density), mate finding (sustainable population), early mortality may favor subsequent survival.

Interactions between species can be very complex even when only 2 species are considered (through impact on environment of other species). Each species can affect environment of other positively (+), negatively (-), or have no effect (0). Major categories include: mutualism (++), commensualism (+0), predator/prey (+-), competition (- -), and amensalism (rare) (-0).

Most crop pests are r-strategists, e.g., aphids and phytophagous insects in general. Natural enemies, i.e., parasites and predators, are mostly K strategists. This is said to be one reason for the high failure rate associated with introductions of exotic natural enemies.

Most crop plants are early succession plants, i.e., they are weedy species and accordingly they also are r-strategists. The r-selected species are particularly suited to exploiting the ecological patchiness and instability of the agroecosystem.

The parallel between agroecosystems and island defaunation is obvious. Many factors affect the various population processes: number of potential invaders, distance of source of invaders, conditions for invasion and settling, attractiveness (favorability) of crop.

Numerical response is the key to the success of entomophagous insects; occurs in the following ways:

Experimental data suggests that Holling's disc curve is characteristic of the predatory behavior of most entomophagous insects, i.e., the number of prey attacked increases but at a proportionately slower rate as prey density increases.

Interactions between species, especially between predators and prey are of great theoretical and practical interest to ecologists.

Interactions (reproduction planes) between predator and prey. There must be some prey to sustain the predator. Pb is the predator density which drives prey to extinction. Ka is the carrying capacity in the absence of the predator. Wb is the marginal cost of a given level of predation. Pa is the minimum prey density required to sustain the predator population (and avoid extinction). Qa is the marginal benefit of prey. The superimposed reproduction planes show equilibrium lines for predator, Eb, and prey, Ea, and a particular dynamic trajectory.

We can draw an infinite variety of these curves, relationships not necessarily straight line, stability will depend on characteristic of curves (assuming these represent real life situation).

Community stability: A central tenet of classical ecology is that complex communities tend to be more stable (largely based on observation) theory recently challenged, argument that simple systems may be less subject to external disturbances. What has emerged is that:

Population dynamics/epidemiology theory is a vast and formidable subject. However, the synoptic model developed by T. R. E. Southwood (1975 and subsequent papers) is most instructive, and summarizes much of the theoretical concepts and empirical bases for contemporary model building.

The model has 3 salient features:

Common feature of epidemics (epizootics) is that outward migration (emigration) occurs advancing in waves. Knowledge of spatial distributions and population dynamics can be used to manage populations over large areas.

Simulation games have been used to study and test ecological theory. One such model is the so-called "Game of Life". This is a game invented by a mathematician to illustrate (mimic) environmental feedback loops, a number of individuals (checkers) are positioned at random on board. Rules are that any individual adjacent to one or more neighbors dies of isolation and any adjacent to four or more individuals dies of overcrowding (two negative feedbacks) and that whenever an empty square exists adjacent to exactly three individuals, a new individual is born (a parody of real-life).

The population dynamics of pests occurring over large areas can be investigated by gridding the area and monitoring population trends, studies of dispersal (migration) reproduction, competition, weather, environmental conditions, etc.

Pest management is as applied science with no unique principles. Focus of all pest management programs is to "erode the homeostatic capability" ("homeostasis") of pest populations i.e., to reduce the equilibrium position of populations (K) spatially and temporally so that the frequency and duration of fluctuation above economic thresholds are reduced or eliminated.

Pest management is the selection, integration, and implementation of pest control strategies on the basis of predicted economic, ecological, and sociological consequences (Rabb 1972).